While we are likely to see variable amounts of cloudiness through the weekend, there’s only a small chance of getting those clouds to produce anything. The main part of a moisture plume coming out of the sub-tropics will stay just offshore, but the leading edge of moisture will produce mid and high level cloudiness for the next several days. The best chance of getting any rain occurs on Sunday and next Wednesday, but even then the odds are only about 20% each time. Temperatures will heat up quickly from near 70 on Friday to upper 70s on Saturday. 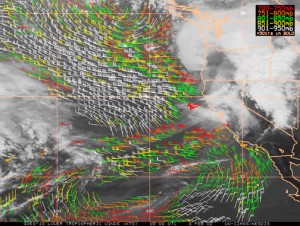 Even though we don’t get hurricanes here in Nevada, we do get storms just as strong. They just aren’t caused the same way. Many of our winter storms blow hurricane force winds, especially up in the mountains.  In fact, wind gauges in the Sierra have clocked gusts in excess of 165 MPH, on par with anything Hurricane Katrina threw at the Gulf Coast.

Also, real hurricanes can affect our weather in Nevada. Moisture from the remains of hurricanes will often drift over the state, touching off some pretty spectacular thunderstorms. Kind of a cheap way of visiting the tropics… or at least having the tropics visit you.