While a light rain shower (or even an isolated thunderstorm) is possible up in the mountains Wednesday afternoon, the overall weather picture calls for dry and mild weather through the rest of the week. The ridge of high pressure responsible for the “mild” is flat enough to allow a weak low pressure center to move into southern California, which could help spring a few mountain showers mainly south of Lake Tahoe. It will also allow a few clouds to drift across the region, but it is unlikely we will see any precipitable benefit from them here in the valleys. 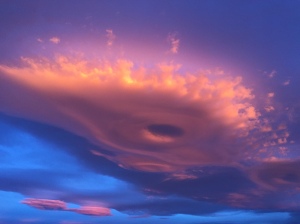 Yesterday I showed a great picture of a cloud with a “hole” in its base. (See it at mikealger.net) Just what caused the unnatural looking hole? Here’s my best shot at what I think is happening. It’s sort of a combination of what we call a hole-punch cloud, and a Sierra Wave (standing lenticular cloud.) 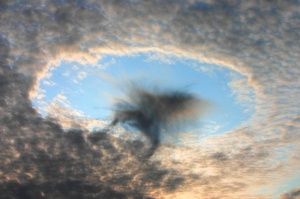 The hole-punch cloud is usually seen in a cirrus or alto cirrus cloud. Something will happen (usually a jet flying through it) which provides a nucleation site and all the extra moisture condenses and starts to drop out. A lot of times it will evaporate before reaching the ground and you have a “dry hole” in the middle of your cloud. 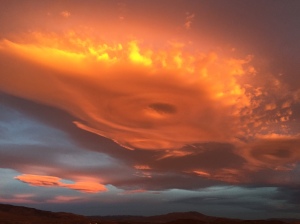 In this case, I doubt it was started by an aircraft, but its position right in its center tells me something. In a Sierra Wave cloud (a standing lenticular cloud) the center of the top of the cloud is its highest (and therefore its coldest) point. In this case, I think there was enough moisture so that the very top of the cloud began producing precipitation, which caused downdrafts, creating warming and drying where you see it in the picture. It’s a “mesohigh” similar to the feature you get in the eye of a hurricane, or sometimes under a thunderstorm downflow.

Any way you look at it (or explain it), it could be the coolest local cloud picture ever sent in to me.

15 thoughts on “Explaining the “Hole in the Cloud.””