After a winter that will go down in the books as one of the least wintry ever, it looks like there will still be reminders that winter can still make an appearance nearly year round. A cold low pressure center will begin to drop through the region late Friday into Saturday, bringing a good chance of several inches of mountain snow; with a chance of small accumulations in the foothills around Reno during the same period (although it is not likely we will see snow all the way to the valley floor.) For Friday itself, an isolated shower is a possibility, but those odds increase Friday night into Saturday morning. Highs on Friday will be a cool 60, and will drop to a chilly 54 on Saturday before warming rapidly back into the 80s by Tuesday. See…I told you we can get just about any kind of weather!

On a personal note, after being gone for over two weeks (in the British Isles), I’d like to thank my colleague Chloe Beardsley for working 17 days straight to cover in my absence. She has earned a rest!

And while I won’t give you a “What I Did on My Spring Break” book report, the trip to the Isles was pretty magical.  Over the course of two weeks, we visited London, Scotland and Ireland (I’m half Irish.) I’ll include just a few pictures. 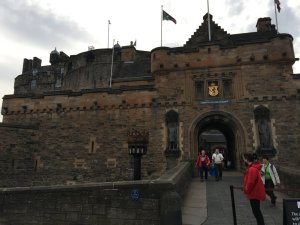 Edinburgh Castle in Scotland. Stumbled on the Scottish Crown Jewels and the Stone of Scone (or Stone of Destiny)…Didn’t realize they were in there.

The Dingle (An Daingean) Peninsula. Best seen on bicycle.

Castles galore in Ireland. This is St. Mary’s Abby, with the Rock of Cashel in the background.

I’ll probably be adding some more over the next few weeks. If you are a history buff, there’s no better place to go. If you go and you aren’t a history buff, you will be by the time you’re done.