Three letters pretty well sum up the forecast for the next week: H-O-T. A very strong ridge of high pressure will plant itself just east of the Great Basin giving us a weak and dry southwest flow with temperatures that will move from the low 90s Tuesday to the upper 90s on Wednesday and then to triple digits by Thursday and into the weekend. All that heat will combine with a weak offshore low late in the week to give us a chance of thunderstorms at that point, which is not the best news when it comes to the fire situation. 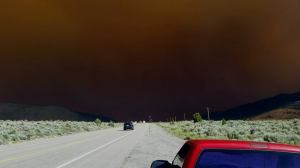 And speaking of fires, we could see some haze from the Washington Fire near Markleeville, and areas to our south could see some heavy smoke, and precautions should be taken Tuesday morning in southern Douglass County and the Smith and Mason Valley areas especially if you are sensitive to smoke. As the day progresses, the winds should shift back around to come out of the northeast, which will push the densest portion of the smoke plume back away from the region. 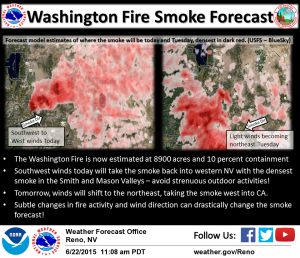