After dealing with flash flooding Tuesday night, the conditions are not much changed. That does not mean that there will be widespread flash flooding (the flooding Tuesday was quite localized), but it does mean that conditions could come together in localized areas to produce intense precipitation for short periods of time. At present, Thursday’s high temperature should reach near 100 degrees again, with a 30% chance of getting wet. Scattered afternoon thundershowers will continue through the weekend before slowly drying out as we move into next week. Temperatures will slowly back off as well, dropping into the low 90s into the weekend and staying there through the middle of next week. 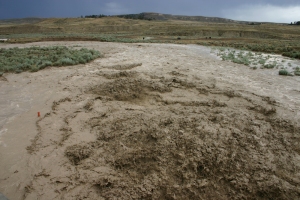 When we think of flash flooding in this area, we tend to think of events that happen out in the wilds, but as we saw Tuesday, the potential exists for dangerous situations even inside the city limits. It’s always important to never underestimate the power of moving water over a roadway. It takes less than two feet of water to float a car away, and it’s impossible to know how deep the water is below the surface. Far too many people have made a fatal decision, thinking water is shallow. Don’t be one of them.