As the moisture from what was Hurricane Delores moves out of the region, the thunderstorms will move out with it. There could still be enough residual moisture left over for scattered thunderstorms Wednesday, but those should be less frequent and not as strong or wet as what we saw Tuesday. By Thursday, the airmass stabilizes to keep thunderstorms out of the area, and sunny skies will return to take us though the weekend. Temperatures will climb from the upper 80s Wednesday into the low 90s By Saturday. 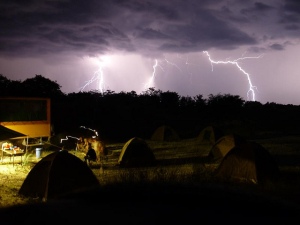 Yesterday Richard asked if aluminum tent poles were dangerous in a thunderstorm. I always get a little nervous when people make a big deal about holding onto or being near some metal when lightning is in the region. That doesn’t mean that you should wave a nine iron in the air when lightning is near, because it may minutely increase your chances of being struck. But my fear is that people will think that as long as they aren’t near metal that they will be safe in an electrical storm, which is folly. And in Richard’s case, the aluminum support poles could actually make a tent safer if they are arranged in such a way to make a Faraday Cage around the camper. (Notice the stress on “could.”) More on this tomorrow.