This time of year if you have a low pressure center somewhere up near the state of Washington, almost inevitably that will mean sunshine for us, and that’s exactly the situation we have coming up this weekend. Sunshine with temperatures somewhere near 90 degrees (a few below average) will stick with us not only through the weekend but through most of the next week as well.

We live in one of the breeziest places in the country… and in the summer, you can almost count on the wind kicking up in the afternoons. The “Washoe Zephyr” that you may have heard about is our local moniker given to the late afternoon thermal winds that swoop through our western valleys. What causes them? 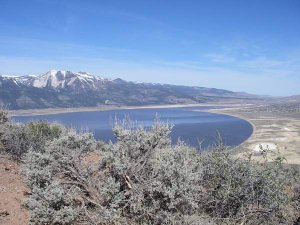 Washoe Lake…back when there was water in it.

It’s all due to differential heating. In the late hours of the day, the sun drops lower into the western sky. That causes its rays to directly hit the hills on the east side of the valley, heating them up… while the hills on the western side fall into shadow and cool. The warm air on the eastern side rises, while the cooler west air sinks, and you have a conveyor belt effect that sweeps winds out of the west to the east.