A low pressure center will pass over the region Friday, giving us better than even chances of showers and thunderstorms. Temperatures will drop significantly, likely failing to get to the 80 degree mark, although they will rebound quickly as the skies clear over the weekend, getting back to 90 degrees by Sunday. The latest model runs have decreased the instability of the system, so the possibility of flash flooding has dropped somewhat, but that also brings in the chance of dry lightning, and a Fire Weather Watch is in effect for the mountains, including Lake Tahoe. 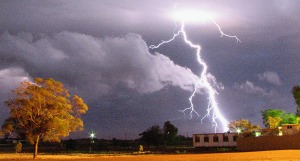 A question was asked about how safe an indoor pool is during a thunderstorm. That’s a really tough question. Lightning is very unpredictable. The problem with being in an indoor swimming pool isn’t that you will be a direct target for a lightning bolt, but you could be on an indirect pathway for the electricity (some 300 million volts or so) to get into the ground. Pools (indoor and outdoor) have extensive plumbing and wiring attached to them, and a hit on the building could potentially send a jolt through those pathways back into the pool. Is it a likely occurrence? Maybe not, but a large steel building does make an attractive target. More tomorrow.