Clouds will make frequent appearances on and off for the next several days as a flat ridge of high pressure allows some overrunning moisture to come through the region, but those clouds produced are very unlikely to produce any precipitation. Temperatures will be seasonable, in the upper 60s to lower 70s through early next week, after which the ridge breaks down allowing a chance of some storms to come through by mid-week, but there is still some uncertainty about the exact path of those storms. 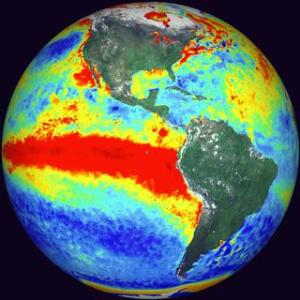 As is usual when it comes around, an awful lot of attention is paid to the phenomenon known as El Niño. An awful lot of misinformation usually accompanies talk about it, also known as the El Niño Southern Oscillation (ENSO.) Just what is El Niño? Let me start by saying what it is not. It is not a storm, climatic pattern or large funny character played by Chris Farley (Google it if you haven’t seen it.) In a nutshell, it is an oceanic temperature condition which takes place along the equatorial waters in the eastern Pacific. Tomorrow, I’ll tell you what causes it, and over the next several days I’ll tell you how it may (or may not) affect us.