Sunshine and morning haze will stick around through Saturday as a ridge of high pressure stays put till then. The haze is a result of fairly strong temperature inversions which will trap pollutants in the valleys, and has resulted in a Yellow Light Burn Code (voluntary cutbacks on burning wood.) On Sunday, the next winter storm moves into the region bringing up to an additional foot of mountain snow, and rain turning to snow in the valleys. There’s a lot of uncertainty as to how much, if any, accumulation will take place on the valley floor…depending on how quickly the cold air moves in. 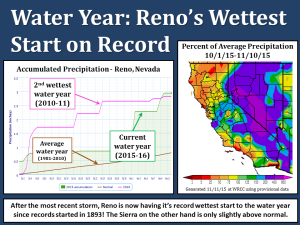 So far we are off to the best start to our water year ever…when you look at the Reno numbers. Our water year starts October 1 and runs through September 30. As of Nov. 11, Reno has received 2.94” of precipitation, which is nearly 400% of average. And if you look at the calendar year, we have picked up 7.54” of rain…slightly more than the average for a whole year, and we still have almost two months left.

While that’s nice news, it’s tempered a bit by the fact that it is still early in the water year, and our mountains are only running a bit above average. But we’ll take it.