It still looks like a petty active weather pattern for the rest of the week. A weak storm system should bring scattered showers through Wednesday morning, with snow levels rising to about 7,000’ through the day. Thursday should see us between systems, although a stray shower isn’t out of the question. As we head into the weekend, some colder and stronger storm fronts will move through, bringing valley rain and mountain snow on Friday and Sunday, with a brief break on Saturday. 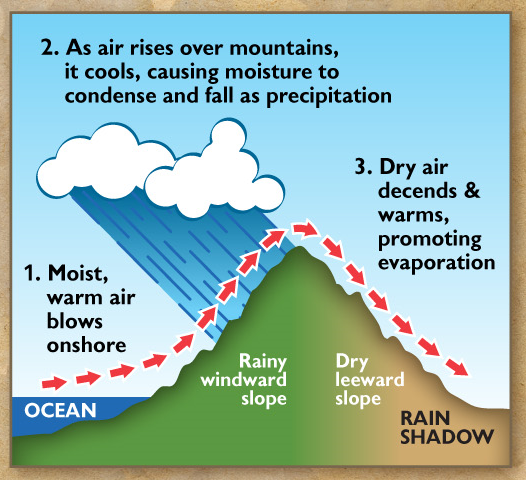 The air becomes “dry” on the lee side from a relative humidity standpoint, since the temperatures warm as the air descends and compresses.

When you are talking about a rain shadow, many people mistakenly think that the Sierra “block” or “stop” the moisture from getting over the mountains. That’s not really how it works. Just as lifting air causes precipitation, descending air heats up, which evaporates the clouds and suppresses precipitation. As the air flows up the west side of the mountains, it increases rain and snow, but as it flows down the back side into western Nevada, it heats up and kills the precipitation producing process, unless some other lifting process is strong enough to overcome the backside drop. So the mountains don’t block the moisture… it just turns back into vapor and stays in the air, bypassing us until it gets lifted by some other process further to the east.