With the departure of a dry cold front, the weekend is shaping up to be warmer and calmer than what we had for the latter half of the work week. High temperatures will bounce back up into the 90s Saturday, and will continue to rise slowly through the middle of next week, where 100 degrees is within reach. Even with the heat, the airmass is dry and stable enough to keep the skies clear and the threat of thunderstorms at bay.

Last week, Sam Green sent me a few pictures like the one below. He wondered what we call the phenomenon. 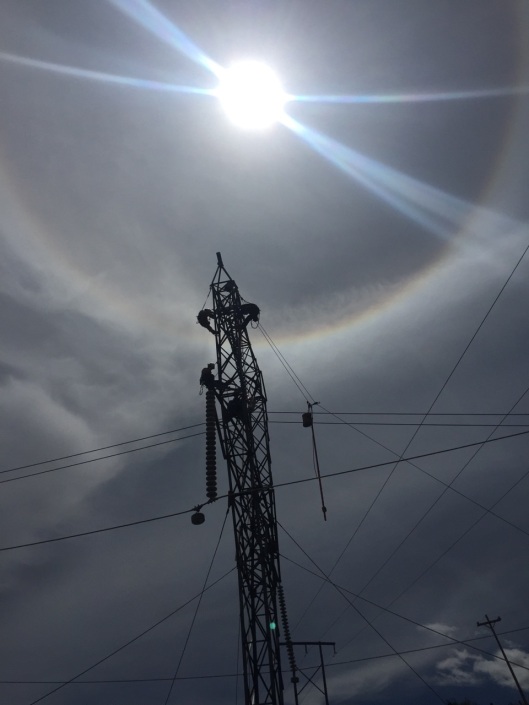 I would have loved to give Sam an answer with a fancy or romantic sounding name, but the simple (and accurate) answer is a sun halo. Yeah, I know, kinda boring.

They are also known as 22 degree halos…which may be even less sexy. They are formed when there is enough high level moisture (usually around 30,000’ elevation) to form tiny hexagonally shaped ice crystals, which act as prisms to refract the sun’s rays and create the rainbow colors. The geometry of the crystals is such that the halo is formed 22 degrees out from the sun (hence the utilitarian name.) At times, you will also get very bright spots on either side of the actual sun along the halo that are called sun dogs. It can all be a possible sign that storms might be moving in, although around here that’s not the case as often as it is.