This week will be nearly the opposite of the last weather-wise. A building ridge of high pressure will clear out our skies, and slowly warm us up, from the low 60s Tuesday to the mid-70s by Friday through the weekend. Overnight lows will be quite cool to begin with, in the 30s Tuesday and Wednesday before warming slightly to the mid-40s by the weekend.

(Before all the wild weather started last week, I’d started a thread about instruments spotted on the Mt Rose Highway. I’ll start it again and put it all down here.)

DEAR MIKE: “We were driving over the hill into Incline Village the other day, and my wife noticed some funny looking towers with some instruments hanging off of them.  Since I hadn’t seen them before, I thought they might be traffic counters, but my wife said they were something to help catch speeders. Then I noticed a wind gauge. Do you know what these things are, or could you tell me how I could find out? The Missus and I are still arguing about it.”

I thought you’d never ask. It’s not often I can tell the public about a way the Dept. of Transportation is utilizing technology, and save a marriage at the same time. For starters, you are both wrong, so stop your bickering.

Now, let me give this disclaimer. Several years ago, I was hired by the Nevada Department of Transportation as their consulting meteorologist, so I am obviously going to be somewhat biased about this program, but I really think it’s a great thing for Nevada travelers. The units that you were seeing are called Road Weather Information Systems, or RWIS for short.  They are the result of NDOT’s efforts to use some state of the art technology to help keep the roads clear during the winter. Here’s how they work:

Each tower you see on the side of the road has a complete weather station on it that will give the current conditions at that site, including temperature, humidity, wind speed and direction, precipitation and the like. All of this data is beamed straight back to the NDOT offices, giving them instant access to what Old Man Winter is doing to the area.

And while that information is great to have (especially for a meteorologist), what makes this equipment so terrific is not what it tells you above the road, but rather in and on the road. The units are also equipped with road sensors that will tell you the temperature of the pavement, and whether the surface is dry, wet, snowy or even if there’s black ice.  Knowing this makes NDOT’s job of keeping the roadway clear a lot easier, and it also makes the environment happy. If they know when the road will freeze, they can use de-icers instead of heavy doses of salt. And if salt is used, the sensors can tell how much is still on the road, so they don’t have to keep piling it on when it’s not needed. Less salt equals healthier trees.

NDOT began installing the systems back in the early 90s, mostly in the Tahoe basin and extreme western Nevada, but it since has grown to dozens of sites all across the state. Cal Trans also has several over I-80 in California. And the best part about it is the cost for the systems is more than made up for by savings in road maintenance. And who says the government can’t give you something for nothing? 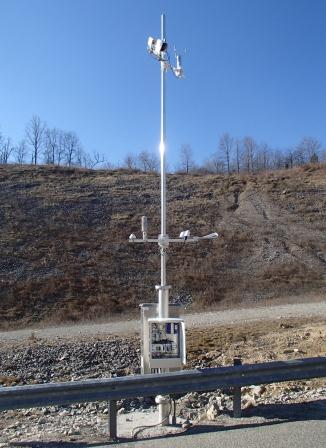 Eventually, many of the RWIS units can expand to include other functions, like visibility sensing, driving variable message signs, and even counting traffic.

Counting traffic… that’s what you originally thought, huh?  So you were sort of right.

But keep it to yourself.  I don’t want to start another fight.