As we head into Easter weekend, it will start out on a very nice note. Mostly sunny skies Saturday may morph into a partly cloudy afternoon, and temperatures will warm up into the mid-60s. The temperatures won’t change much on Sunday, but the first of a series of moderate spring storms comes through Sunday afternoon. If you are traveling over the mountains, you might want to clear the passes by the early afternoon, as the passes could be impacted.

We’ve been relating the adventure of Matt Suter’s amazing quarter mile trip through the air in a tornado back in 2006. There have been previous cases of people being carried by tornados, and some have even been toted longer distances (there are reports of trips of a mile or more), but none of those poor souls lived through the ordeal… understandable when you think of the buzz-saw nature of the debris in the twister, and the inevitable drop from hundreds of feet once the tornado releases its grip.

But while Suter easily outdistanced the other living contenders for the all-time “tornado long jump” title, his story is not without precedence. Tales of goldfish swimming contentedly in their bowls being found miles away from their destroyed homes are legendary. And other humans have also survived similar experiences. Back in 1955, a 9-year old girl and her pony took a 1,000 foot flight inside a tornado (can you imagine what that pony was thinking?), landing unharmed in a field. 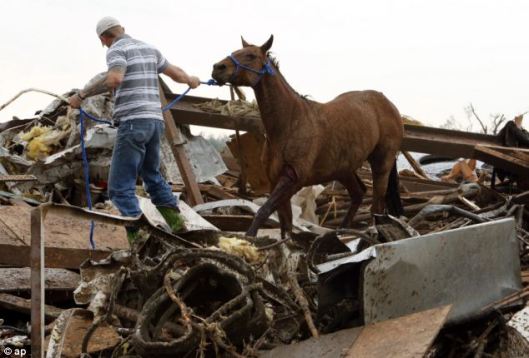 Of course, horses have always had a special kind of karma when it comes to surviving twisters. According to Thomas Grazulis’ “Tornado-Nature’s Ultimate Windstorm”, five horses were the only survivors of a huge tornado in Kansas in 1915 that destroyed their farm. They were carried a quarter mile away from their leveled barn… unhurt, and still attached to the same rail.

Somebody was living right.