We are going to start the week off on a pretty hot note, but those temperatures will peak on Tuesday and will start a slow slide before bottoming out on Friday and Saturday. Look for highs to reach the low 90s in Reno on Tuesday with sunny skies. A sunny Wednesday follows with highs dropping into the upper 80s. A cold front starts to move onshore Thursday bringing some clouds, wind and cooling us to the upper 70s. The front passes over us on Friday, and scattered showers and/or thunderstorms come with it, with high temperatures falling to the upper 60s. The weekend dries up, but stays cool.

These warmer temperatures have many turning their swamp (evaporative) coolers back on. Now that we are in June it becomes less likely that we will get any freezes hard enough to do any damage to the units. The only downside is it could still get cool enough at night so that the house may get chilly at night as the cold air bleeds in through the open vents. But if you don’t mind that, it’s probably a good time to fire them up.

There are lots of areas across the country that get pretty hot where you would never find a swamp cooler. That’s because you also need low humidity in order for the physics to work out. A swamp cooler works because of the heat of vaporization. In order for liquid water to evaporate, it needs to take in energy to break the intermolecular attractions between water molecules. So liquid water absorbs heat from the air as it evaporates, cooling the air. A simple design allows swamp coolers to take advantage of this. 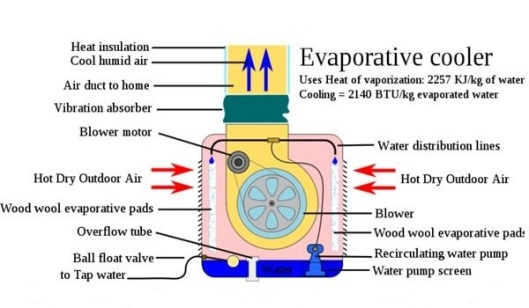 It’s basically a large box with three slotted air intakes, and one exhaust vent which blows into your house. A small water pump feeds a slotted trough above absorptive mats which cover the air intakes. Water trickles down through the mats, which are permeable enough to allow air to be drawn through. A simple squirrel cage fan draws the hot (dry) air through the soaked mats, evaporating the water and cooling the air which is then blown into your house. They are extremely economical, using about 10% of the electricity of a standard AC unit, and can make a house comfortable even in triple digit outside temperatures.