While a few isolated snow showers into early morning Saturday are possible, we do have a brief break in the action before another moderate storm moves through the region Sunday and Monday. For Saturday, high temperatures will struggle to top 40 degrees, and lows will be in the mid-20s through the weekend. Late Sunday, another storm front moves through, giving everyone a chance of more snow, although the mountains once again will see the lion’s share. The next storm to come through will arrive on Wednesday and will be a little warmer. 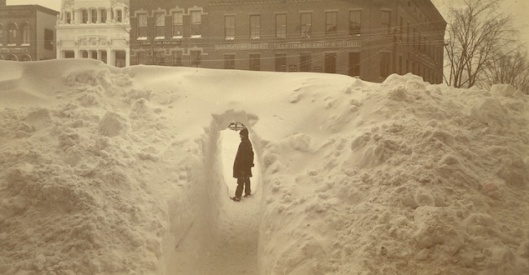 Yesterday I talked about the deadliest blizzard worldwide which occurred in Iran back in 1972, claiming 4,000 lives. The United States has its share of deadly winter storms as well. Of them all, the Great Blizzard of 1888 would probably have to top the list. Dubbed “The Great White Hurricane”, it paralyzed nearly the entire east coast, piling up snowdrifts nearly fifty feet high, and taking 400 lives. The “White Hurricane” (without the ‘Great’) in 1913 was likely the second deadliest, claiming 250 lives in the Great Lakes Region.  Other storms have been colder and snowier, but none so deadly.